Tanja Seiner works at the intersection of the conceptual investigation of the processes and mechanisms that shape living environments, and the transfer of these findings into tangible spaces and formats like exhibitions and educational programs. Central to her work is the exploration of the transformative potential of design.
She works for cultural institutions like design and science museums, academia, non-profit organisations and enterprises. Her expertise encompasses concept development, design, curating, science communication and teaching.

Subsequent to her diploma in product design from the Karlsruhe University of Arts and Design, Tanja Seiner worked as a senior designer at studio Jerszy Seymour Berlin. Here she conceived products and furniture for industry but soon began to collaborate on conceptual installations for museums amongst which MUDAM Luxembourg, MAK Vienna and Marta Herford (2007–10).
As assistant curator at the municipal art space Lothringer13 Halle in Munich she contributed to the realignment of the institution and collaborated on numerous group exhibitions with local and international artists (2014–2017). Her exhibition »Touch deeper« (Lothringer13 Halle, 2016) investigated how the technological promises of efficiency and control have changed and are changing human behaviour and living environments with works by international designers and artists.
In her first self-initiated exhibition »Pet Market« (erstererster, Berlin 2015) she explored the relationships between humans and their pets from a design perspective. »Creatures Made to Measure – Animals and Contemporary Design« at Museum Marta Herford (2018–19) and Design Museum Gent (2019) took her research into the role of design in human-animal relationships yet further. The accompanying publication was published at Kerber Verlag (»Creatures Made to Measure«, Eds­. Design Museum Gent, Marta Herford, Tanja Seiner, 2019).
In 2020, Tanja curated the Pop-Up exhibition “Fungi for Future” at BIOTOPIA Lab in Munich, which highlights the relevance of Fungi in nature and everyday life. In her ongoing collaboration with BIOTOPIA – Naturkundemuseum Bayern, she conceives and curates thematic exhibition areas for the future museum.

Tanja regularly brings her investigations to design and art education. She has taught at the product design department and in interdisciplinary seminars in collaboration with the department of art history and aesthetics at Kunsthochschule Kassel (2010–15), at the cx centre for interdisciplinary studies at the Academy of Fine Arts Munich (2018) and was visiting curator at the Kunst-Transfer-Praxis program of the Academy of Fine Arts Nuernberg (2020).

Tanja Seiner co-founded an collaborated with UnDesignUnit, a studio that values design as a critical medium in investigating current and emerging developments and uses it as a tool for conceiving education and exhibition formats, from 2018-2021. She also co-founded the housing cooperative KOOPERATIVE GROSSSTADT which strives to create communal urban spaces in Munich with its building projects.

The world of fungi is immensely diverse. It is estimated that there are up to 3.8 million species of fungi-over 90 per cent of which may still be unknown. Just as plants and animals make up two kingdoms of life, fungi make up their own kingdom in nature. Fungi can be harmful and cause serious diseases in plants, animals and people. At the same time, life as we know it would not be possible without them: as decomposers, they convert organic waste back into the cycle of life.

Humans have always made use of fungi in many ways and are still discovering more and more species in this largely unexplored realm of organisms. This leads to promising applications, such as new materials that could replace plastics and open up a path to an oil-free future.

The more we learn about these organisms, the clearer it becomes how they shape our everyday lives.

Education seen as a curvy organism rather than a straight line and school as a fluid, morphing shape rather than a box – I propose the metaphor of an amoeba to define potential characteristics of education and encourage taking detours in educational processes.

Fig. 1
Education is a type of organism which cells have the ability to alter their shape and appear in changing environments.

Fig. 2
Educational cells are morphing their shape primarily by extending and retracting pseudopods.

Fig. 3
Pseudopods are temporary arm-like projections which enable educational cells to move and be fed.

Fig. 4
Pseudopods consist of and grow with bulges of knowledge formed by the coordinated action of people involved in education.

Fig. 5
Educational cells typically are nourished by extending pseudopods to provoke encounters and discussions, and absorb information and knowledge.

Fig. 6
The appearance and internal structure of pseudopods are used to distinguish educational cells from one another.

Fig. 7
Education does not form a single taxonomic group; instead, alterations of it are found in every major lineage of society.

Fig. 9
Educational cells have a porous permeable membrane which allows other perspectives and disciplines to pass into the cell.

These thoughts were triggered during Re-Editing Education: Design as Learning lab with Jan Boelen and Vera Sacchetti during Porto Design Biennale 2019.

Amoeba drawings ©2019 by the University of South Florida https://etc.usf.edu/clipart/

From a concept by and in collaboration with Tanja Seiner

Factory farming or laboratory meat, cuddly pets or robots in animal form – the relationship between animals and humans is often the subject of hot dispute. Animals have always served an important purpose for humans. When, however, the optimization according to human expectations goes so far that animals are having to undergo cosmetic surgery and are bred artificially in laboratories, or even serve as organ donors for humans, we have to ask whether these “creatures” are even still animals at all?

The designers and artists in this exhibition ask for the “acceptable degree” of manipulation and research possibilities of replacing animal-based raw materials and even the animal itself. At the same time, they take a look at the relationships between humans and animals from new perspectives and conceive scenarios that look to the future.

Together with Sarah Dorkenwald and Karianne Fogelberg, Tanja Seiner founded and collaborated with UnDesignUnit from 2018-2021.

The formats proposed by UnDesignUnit are aimed at showing different stakeholders in how far design may contribute to opening up new perspectives, approaches and modes of action. The challenges of our times are addressed by acknowledging their uneasy complexity and seeking out their potentiality by breaking down design into its individual components, in formal terms but also in terms of its context with regard to cause and effect.

Projects include a Future Making Lab at Die Neue Sammlung – The Design Museum, the co-curation of the Hautnah-Fest 2018 and EAT Festival 2019 for BIOTOPIA Naturkundemuseum Bayern and a Speculative Dinner Performance at Deutsches Hygiene-Museum Dresden in 2021.

Promising comfortable and optimized daily routines, numerous smart objects have docked onto us. What are these things (or beings?) that have moved into our homes? How are the objects that surround us changing, and how are they changing us?
The exhibition “Touch deeper” at Lothringer13 Halle in Munich explores these questions with works by international designers and artists, who consider not only new technological possibilities but also the completely analog needs of our changing living spaces. They create alternative views on the efficiency and intelligence of these devices and examine how we, with an increasing number of digital companions and surroundings, want to live. Amid overwhelming technological innovations, “Touch deeper” attempts to also look at those aspects that are often ignored by the promises of a progress that has become its own end. By means of prototypical designs, different perspectives on a digitally enhanced future open up, in which the interplay between technical possibilities and human needs are recalibrated.

Pet Market explores the complex and diverse relationships between pets and humans from a design perspective and provides suggestions and outlooks for their shared living spaces. On the occasion of DMY – International Design Festival Berlin, Pet Market inaugurated at the erstererster gallery in Berlin’s Prenzlauer Berg area in June 2015. Pet Market is an invitation to be inspired while shopping, to be attracted to and seduced by, but also to question and discuss the products on display.

“An intelligently thought through project…Pet Market works at both a design theory and design practice level, can however also be enjoyed for the objects on display and what they are, with no need to search for a deeper meaning, a fact which, when combined with the uncomplicated shop-style exhibition design, makes Pet Market an eminently accessible and highly enjoyable exhibition around a subject to which only very few of us rarely give even a modicum of thought.” Alasdair Thompson, Smow Blog

KOOPERATIVE GROSSSTADT is a recently founded housing co-operative in Munich that also serves as a platform for events and interventions all relating to the topics of architectural quality standards as well as urban living. In January 2016, a symposium with more than 20 invited “experts” – architects, residents, politicians, project developers, designers, artists – took place at the Lothringer13 Halle in Munich. With more than 300 visitors at the “Open Table”, visions and ideas for improved town planning and residential housing construction in favour of a versatile and open city were exchanged, and it was determined how these ideas for a cooperative urban life can be realised.

Exhibition display for models, prototypes and sketches that were created within the context of the design project „Another Cup of Tea“. On occasion of the annual „Interventionen“ exhibition at the regional council Kassel, artists and designers were invited to provide insights to their current work. The photographs of mixing fluids were created by Selina Schwank.

Design provides tools that widen the user´s scope of action. TOOLS was the title of a design course taught by Tanja Seiner at the School for Arts and Design Kassel. It resulted in a publication featuring designs by Natascha Burk, Saskia Drebes, Dominic Ender, Joost Fähser, Gesina Glodek, Julian Herden and Nils Oertel. The array of projects includes experimental music instruments, lightshow-generators, herb distilleries and thermoforming machines for glass.

Easy Frame is a patented system for the quick and easy mounting of canvas and paper on a stretcher-frame without any additional tools. Slotted wooden bars are connected to plastic corners and are fixated with metal pins. 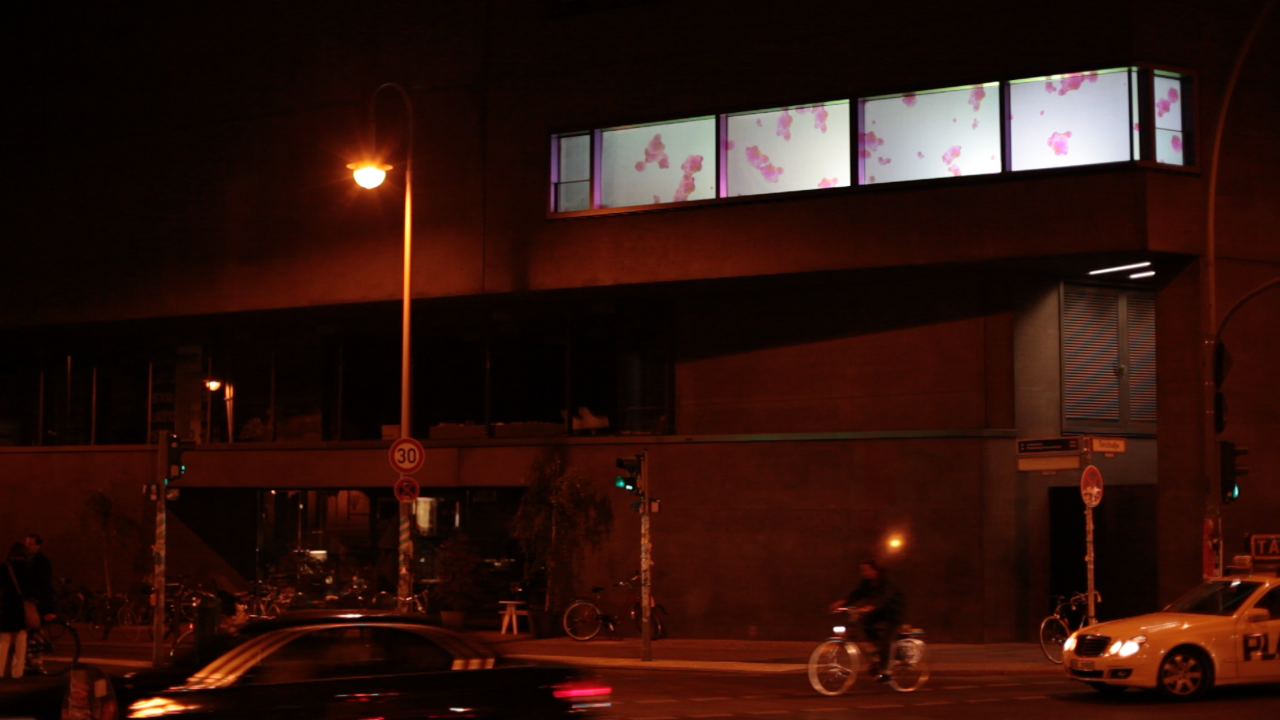 For the exhibition RES PUBLICA/RES PRIVATA, the glass façade of the gallery L40 Berlin was transformed into a thriving scenery of microbes during night-time. The growth of the microorganisms could be observed from the crossroads Rosa-Luxemburgstrasse/Torstrasse – a busy part of Berlin, which reflects the growth and transformation of the illustrated microcosm. The exhibition was curated by Susanne Prinz.

In her position as designer and project manager for Jerszy Seymour Design Workshop in Berlin (2007-2010), Tanja Seiner was in charge of projects for the furniture and consumer goods industry, and the conception and realization of editions and spatial installations for design galleries and museums. The here shown installation „First Supper“ at the MAK Vienna was created on site by melting polycapralactone wax. It provided the functional basis for a public dinner to discuss the idea of an „amateur society“.

Pacman is a soft armchair with large overhanging arms, which can be expanded and retracted. It is a buffer for noisy surroundings and functions as a temporary retreat, for example in open space offices. It offers the possibility to change perspective, to retreat for a short while, relax or concentrate.

Crisp sound that has fallen under the hammer at the christmas auction of erstererster gallery, Berlin. Pared-down minimalist style gingerbread that that comes without icing or decoration.

At Jerszy Seymour Design Workshop in Berlin Tanja Seiner was designing various projects for the consumer goods industry (2004-2005 and 2007-2010). Among them were numerous designs and concept studies for kitchen appliances. These hairdryers for Moulinex have, besides their striking shape and extended handle, another distinguishing feature: the rubber-nozzle can be squeezed to direct the airflow.